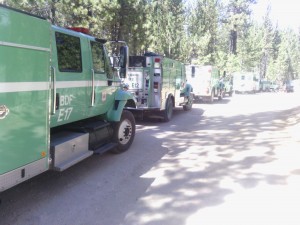 A total of 80 personnel were assigned to the fire along with the 9 engines, 1 crew, 2 water tenders, 3 helicopters, 2 air tankers and one air attack plane.  With light winds in the area and a very quick response this allowed firefighters to quickly move into the mop up phase.

The Comb Fire was reported at 10:25 am on September 27, 2015. It was burning near Holcomb Valley Campground on the Mountaintop Ranger District. The cause of the fire is still under investigation. It is holding at approximately 0.25 acre in size, and the forward rate of spread has stopped.  Van Dusen Canyon Road (3N09) remains closed.  Updates will be posted as information becomes available.