SAN BERNARDINO, Calif. -- San Bernardino National Forest officials have welcomed Scott Howes as the Forest's new Deputy Fire Chief. Chief Howes, who has served the public with the U.S. Forest Service for 34 years, was most recently the Division Chief for the Front Country Ranger District. Chief Howes started his career on the San Bernardino National Forest in 1987, … END_OF_DOCUMENT_TOKEN_TO_BE_REPLACED 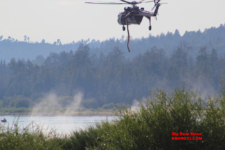 Two fires have been reported this afternoon in Big Bear.  A vegetation fire at Tip Top Mountain, east of Baldwin Lake near Forest Road 2N02 was reported to be between 3 to 5 acres as of 5pm.  Due to the remote nature of this fire, tankers and helicopter aircraft are attacking the fire.  The second fire is a lightning snag on a hill on the North Shore near the Solar … END_OF_DOCUMENT_TOKEN_TO_BE_REPLACED

Big Bear News - San Bernardino, CA – It's midsummer in the San Bernardino National Forest, and with temperatures rising, the vegetation drying and wildfires increasing in both frequency and size, fire managers are taking action to the threat by further restricting campfires, smoking and recreational shooting.  The following restrictions are in effect as of Tuesday, August 4, … END_OF_DOCUMENT_TOKEN_TO_BE_REPLACED