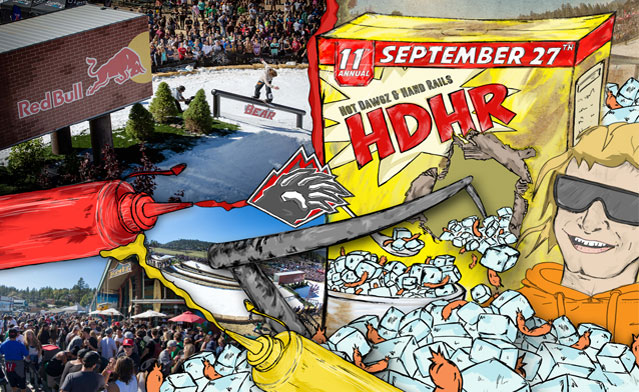 Big Bear Lake, CA, September 26, 2014 – Right on the heels of the news of the acquisition by Mammoth Mountain Ski Area, Bear Mountain is having its winter kickoff party this weekend. The 11th annual Hot Dawgz & Handrails is set for Saturday, September 27 from 9 am to dark, and 40 pro snowboarders will compete for cash on 130 tons of man-made snow starting at 2 pm.

The resort will take advantage of the huge anticipated crowds to unveil new urban style park features. The event is free to the public, and attendees will be entertained with DJs and music, prizes, games and giveaways, and have the chance to buy discounted season passes. The Screamin’ Deal 2014-15 pass is only available at he Bear Mountain season pass office on that day between 9 am and 6 pm.