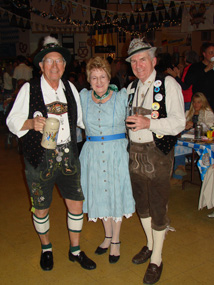 Big Bear Lake, CA. September 26, 2015 – The year was 1810, the place was southern Germany, Bavaria, and life was hard. It was the month of October and all of the countryside had been working day and night to finish their fall harvest and prepare for the onset of winter. While the plow horses were working and the farmers’ days were filled from sun up to sun down, there were some other preparations being made as well. Prince Ludwig I and his entire court were preparing for his upcoming marriage to Princess Therese. The grand wedding was to take place on the 12th, right in the middle of the harvest.

As the big day approached, the countryside and town, in fact all of Bavaria was a buzz with talk of the big day. Everyone was planning on attending as they were all exhausted from the harvest and it was really the last chance before the long, cold days of winter to get out and blow off some steam.

The ceremony went off without a hitch. The weather was perfect, the bride looked beautiful and about 40,000 guests were in attendance. The reception, as you can imagine, was one of the biggest parties history had ever seen with copious amounts of beer and massive quantities of food being devoured. It was a reception fit for a prince. Ludwig I was so taken with all of his guests that he planned a special treat for them. The prince knew that all of his subjects were huge fans of horseracing so he planned to conclude the event with a somewhat impromptu horse race across the great meadow. When the townspeople heard of this they erupted in a jubilant cry ‘Zicke Zacka, Zicke Zacka, Hoy, Hoy, Hoy’, which is still chanted in the beer tents of today’s Oktoberfest celebrations. After a spectacular day and night — and probably more than a couple of hangovers — the great event came to an end.

It was the following fall as the townspeople began to reminisce about the great time they had had the previous year that they decided to honor their prince and celebrate his wedding anniversary in much the same way. King Maximillian agreed, but this party was to be even bigger, better and longer than the first. The event became an annual celebration. And that is how the Oktoberfest tradition began and continues today.

In 1969, two hopeful and devoted German immigrant parents made their way from New York City to California with all of their meager possessions, their two small children, and their long held dreams locked safely inside their hearts. They spent every penny they had ever saved to purchase the then Wawona Lodge, now the Wolf Creek Lodge, and do their best to make a go of it. It was, after all the American dream.

After Hans and Erika Bandows had completed their first winter and summer season as the new owners of the lodge, with winter being one of the fiercest Big Bear has ever seen, they decided it was time to celebrate and they knew just what kind of celebration to have. As a way of saying thank you to all of their new clients and the new friends who had welcomed them to Big Bear Lake, they decided to hold an Oktoberfest just like the one they had attended so often in Munich.

For many days beforehand and with the help of their two daughters, Janet and Monica, the Bandows cooked, cleaned, decorated and cooked some more. While Erika was in the kitchen preparing authentic German food, Hans with sweat on his brow, was preparing the dance floor, hoisting kegs of beer and rounding-up the band.

Finally, with anticipation in their hearts, the Bandows household greeted their guests to the first Oktoberfest in Big Bear Lake starting a tradition that would last more than four decades. At precisely 12:00 noon Burgermeister Hans struck mallet to wood and cried “Ozphat Is!” cracking open the first keg of Oktoberfest beer. The band followed his lead and the merry sounds of the first polka filled the mountain air.

On that day so long ago, they ate a little too much food and drank a little too much beer, but all with a smile. That night, as Hans and Erika’s daughters lay in bed listening to the faint sounds of music and laughter, they wished this night of magic would never end. Little did they know as they drifted off to sleep with spectacular shadows dancing polkas on their bedroom walls, that their wish would be granted.

The Big Bear Lake Oktoberfest has grown to be one of the largest and most authentic on the West Coast. The building is bigger, the band is bigger, there is even more food and beer, but Hans is still Burgermeister and Erika still stops by the kitchen to add her special touch. The magic that filled that glorious first night still drifts through the air. It’s the spirit of Oktoberfest and there is nothing quite like it.

Oh, and the two young girls, Janet and Monica? They’re still around also, assisting their parents when needed. They can often be seen at Oktoberfest raising their steins and cheering “Ein Prosit” and in their hearts giving a special thank-you to their parents for all the wonderful memories.