Sam Cabiglio of Big Bear City, California is an expert on many thing’s that are related to automobiles, but what makes him very special is his connection and knowledge of Porsche and Porsche racing history.  Check out the Pebble Beach Concours d’Elegance Porsche Video with Sam Cabiglio. Besides being a collector of  sports cars and collector cars he has developed a business finding special cars for car collector clients around the world.  With offices in Long Beach, California and now in the Monterey Bay  area of California he has found special cars for the likes of Jerry Seinfeld.  Some of Seinfeld’s collection of rare Porsches includes the 600 horsepower 1969 917 Porsche used and owned by Steve McQueen for the famous race movie “Le Mans” staring Steve McQueen.  And if that wasn’t enough, Seinfeld also owns the 1970 Porsche 908/03 named the “Giant Killer” because it’s compact agile size, light weight and ability to dominate races at Nurburging in Germany and Targo Florio in Italy.  It went on to help Porsche clinch the 1970 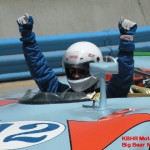 championship halfway through that race season.  Then the “Giant Killer” raced for much of he 1970’s with an astounding and hard to imagine, 1979 Le Mans finish of 2nd place overall.  Both cars were show at the Rolex Historic Races on Saturday August 15 and at Pebble Beach Concours d’Elegance on Sunday August 16, 2009.  Of note is that the 908/03 won 2nd place in the racing Concours race category.  Congratulation Sam and Jerry for a great weekend in Monterey and showing off these beautiful cars.