Running Springs, CA, May 23, 2016 – On Sunday, May 22nd, at approximately 2:11 pm, Arrowhead Area CHP responded to a traffic collision on the 330, just north of Highland Avenue.  Teresa Benitez, a 49-year old resident of Paramount, was driving southbound in a white 2000 El Dorado bus carrying 22 passengers.  For an unknown reason, the front of bus collided with the rear of a white Nissan Versa driven by Christopher Duce, a 30-year old resident of Los Angeles.  Following the collision, the driver of the van lost control of the vehicle, overturning and coming to rest in the roadway blocking both directions of the 330.  A total of 21 passengers in the van were transported by ambulance to St. Bernadine’s Hospital and Arrowhead Regional Medical Center.  Four passengers in the van sustained major injures with no injuries reported by the driver or the passenger in the Nissan.  The accident resulted in a hard closure of SR-330 in both directions from the time of the crash until 6:14pm last night.  The cause of the collision is still under investigation.  Reported by a passenger on the bus, a possible cause for the collision was brake failure.  According to the CHP, the El Dorado bus is in service for inspection. 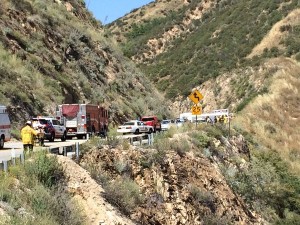 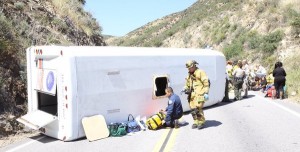