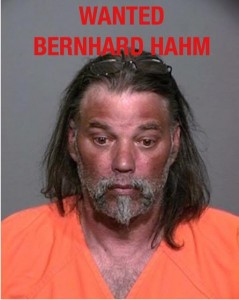 Big Bear, CA, December 7th, 2015 – The Big Bear Sheriff’s Station is requesting the public’s assistance in locating parolee at large Bernhard Michael Hahm. Hahm is wanted on a no bail warrant for violation of parole terms stemming from a voluntary manslaughter conviction in 2011. Hahm previously reported a Big Bear address as his residence, but has since been determined a fugitive by parole agents.

Bernhard Hahm is a 55-year-old WMA, 6’0″ tall, 190 lbs., with brown hair and brown eyes. Anyone having information on the whereabouts of Bernhard Hahm is requested to contact the Detective Bureau of the Big Bear Sheriff’s Station at 909.866.0100. Information can also be reported anonymously by calling WE TIP at (800) 78-CRIME or online at www.wetip.com.