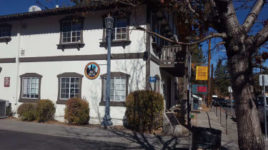 The Big Bear Chamber of Commerce has been awarded four of its five projects submitted for a County Tourism Grant to benefit the unincorporated businesses in our area.  According to Chamber Executive Director, Ellen Clarke, while the amount granted is significantly less than what was requested by the Chamber, the revised budget will allow for most of the projects to move … END_OF_DOCUMENT_TOKEN_TO_BE_REPLACED

Big Bear, CA - The Big Bear Chamber of Commerce announced Tuesday the resignation of Executive Director, Stephanie Thoth. Thoth is relocating to the San Diego area this summer. Her last day will be Friday, June 28, 2019. Thoth expressed “great disappointment” at having to step down, but added that the relocation was necessary in order to meet her family’s needs. “It was with … END_OF_DOCUMENT_TOKEN_TO_BE_REPLACED

Big Bear Lake, CA - The Big Bear Chamber of Commerce has announced the hire of new Executive Director, Stephanie Thoth.  She begins her new duties today, February 26. Board Chair Marlene Cain stated, "Stephanie brings a wealth of knowledge of the local business economy and the Big Bear community as a whole, previous Chamber experience, and a passion for helping businesses … END_OF_DOCUMENT_TOKEN_TO_BE_REPLACED

Big Bear Lake, CA - The Big Bear Chamber of Commerce and new Executive Director, Cynthia Ross, is holding a series of Focus Groups this month to hear your thoughts on the Chamber as well as the Visitor's Bureau. All Big Bear Valley businesses, non-profit organizations, and residents are invited and encouraged to participate. No membership is required. The purpose of the … END_OF_DOCUMENT_TOKEN_TO_BE_REPLACED