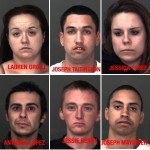 Big Bear Lake, CA 9/8/15 –  On Sunday, 09/06/15, at 6:10 a.m., a citizen called the Big Bear Sheriff’s Station to report that multiple mailboxes were open at the Big Bear City Post Office and mail was scattered on the ground. Deputies responded and found 21 post office boxes, along with four package lockers, that had been forced open.  The Post Master was notified and a criminal investigation was started.  Boxes within the following groups were found open: 400-599, 700’s, 2600-2799; Package Lockers: 2, 19, 140, 143 were found forced open and empty.  The mail recovered at the scene was turned over to the Post Master to be redelivered.

On 09/07/15, the Big Bear Sheriff’s Station received information that an unreported stolen identification and credit card were used to rent a vehicle from Hertz Rent-A-Car in Big Bear Lake.  Through the course of investigation, it was determined that a female victim was vacationing in Big Bear Lake when her unlocked vehicle was broken into and her purse containing her California driver’s license and credit cards was stolen.  The stolen identity was used by a suspect later identified as Jessica Tyree to rent the vehicle from Hertz. While Tyree was at Hertz, she also stole car keys to an unrelated vehicle which were later recovered from another suspect identified as Joseph Taitingfong.  The vehicle was entered into a law enforcement database as stolen.  Shortly after 4:00 a.m. on 09/08/15, the vehicle was observed driving on Highway 18 just east of the Big Bear Dam. Deputies conducted a felony traffic stop and arrested the driver, identified as Joseph Taitingfong, who advised detectives he was staying at a vacation rental on Evergreen Drive in Big Bear Lake.  Taitingfong matched the description of one of the mail theft suspects.  Upon contact with the vacation rental agency, detectives were advised that the residence on Evergreen Drive should have been vacant.  Detectives conducted a consensual search of the property, and found stolen mail from the Big Bear City Post Office and local cluster mailboxes.  Additionally, stolen mail from Orange County, items consistent with identity theft, and drug paraphernalia were located.  The suspects were using stolen identifications and credit cards to rent multiple vacation properties within the Big Bear Valley.

Information was obtained that Tatingfong and the other suspects were staying at another vacation residence in the 42000 block of Eagle Ridge Drive in Big Bear Lake.  Detectives obtained a search warrant for the property and served it at approximately 12:30 a.m. today.  Multiple subjects later identified as suspects in the original mail theft incident were found to be at the location at the time the warrant was executed.  As a result of the search, additional stolen mail and packages, burglary tools, and drug paraphernalia were seized.  Suspects Lauren Orgill, Joseph Maybrier, Jessie Berry, Jessica Tyree, and Anthony Lopez were taken into custody without incident.  A records check confirmed that Suspect Lauren Orgill is on Post Release Community Supervision for a prior felony conviction of possession of a controlled substance, and Joseph Maybrier is on active probation out of Orange County for burglary.  Taitingfong was originally arrested during the traffic stop on 09/08/15 for possession of a stolen vehicle and booked into the Big Bear Jail on $50,000 bail.  On 09/09/15, all six suspects were booked on felony charges of burglary, possession of stolen property, and possession of 10 or more identifications with the intent to commit fraud.  All suspects remain in custody at West Valley Detention Center in lieu of $50,000 bail with arraignment hearings set for 09/11/15.

At least two of these suspects were determined to be involved in the mail theft case from Big Bear City Post Office that occurred earlier this year in June.  Due to the nature of the theft and the number of mail boxes affected, it is believed that additional unreported victims may exist.  If you believe you are a victim or have seen any of the suspects depicted in the attached photographs tampering with mailboxes or cluster boxes in the Big Bear Valley, you are urged to contact the Detective Bureau of the Big Bear Sheriff’s Station at (909) 866-0100.  Information can also be reported anonymously by calling WE TIP at (800) 78-CRIME or online at www.wetip.com.  The Big Bear Sheriff’s Station has recently seen an increase in identity theft reports in the Big Bear Area.