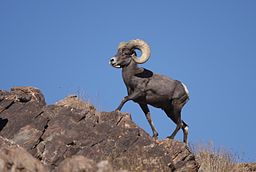 Big Bear, CA, Sept. 6, 2014 – Wild animals are a fairly common sight in the Big Bear Valley and surrounding mountains. Squirrels, chipmunks, raccoons, and even coyotes are seen every day. There are other animals that we share our home with that we are rarely lucky enough to see.

Big Bear was named after the huge Grizzly Bears that roamed the valley in the 1800s. The Serrano Indians lived in harmony with the mighty Grizzly and thought of these animals as grandfathers. Sadly, by the turn of the century, the miners, loggers, and cattle ranchers who came to the San Bernardino mountains had killed the last of the Grizzlies. However, years later the smaller, less aggressive Black Bear was introduced into the mountains and can be seen quite frequently raiding trash cans and bird feeders.

Some of the more secretive animals include the Bobcat and the Mountain Lion or Cougar. Both cats are very shy and will avoid confrontations with humans if at all possible. The Bobcat is the smaller of the two weighing about 20 pounds whereas the Mountain Lion can reach more than 8 feet in length and weigh more than 160 pounds.

One of the most commonly seen and heard residents of Big Bear is the Coyote, but within the dog family we also have the Gray Fox. Foxes live in family groups while their pups are growing, but otherwise live alone or in pairs. They also hunt mostly at night which is why they’re rarely seen.

When you’re driving our mountain roads, especially at night, keep your eyes out for Mule Deer. These beautiful animals can be 6 feet in length and 3 and a half feet tall at the shoulders and are known for their large, furry ears similar to those of a mule. If you’re extremely lucky, you may even catch a glimpse of a Big Horn Sheep, which can sometimes be seen jumping from rock to rock as you travel between Big Bear and Lucerne.