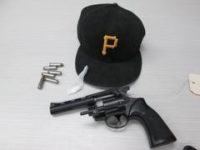 Sugarloaf, CA – At approximately 9:15 p.m. on Saturday, August 17th, deputies from the Multi-Enforcement Team and patrol deputies of the Big Bear Sheriff’s Station conducted a routine compliance check on 46 year old Donovan Hogan at a residence in the 200 block of Holmes Lane in Sugarloaf. Hogan is currently on Post Release Community Supervision (PRCS) stemming from a previous charge of being a felon in possession of a firearm. As part of former Governor Jerry Brown’s 2011 Realignment Plan (AB109), in order to comply with a U.S. Supreme Court decision requiring the State of California to lower its prison population, offenders with non-violent, non-sexual and non-serious convictions serve reduced sentences in county jails and are then placed on PRCS through the County’s Probation Department after being released. Hogan is also a documented and self-admitted Public Enemy Number One (PENI) gang member.

Upon initial contact with Hogan during the compliance check, a brief struggle ensued, and Hogan was placed into handcuffs. During a search of Hogan, deputies located a loaded handgun with the serial numbers removed, as well as methamphetamine.

Donovan Hogan was detained without further incident and booked into the Big Bear Jail on felony charges of being in possession of narcotics while in possession of a loaded firearm, being a felon in possession of a firearm and obliteration of identification numbers of a firearm. Hogan remains in custody without the possibility of bail with an arraignment hearing scheduled for yesterday in San Bernardino County Superior Court.

The Multi-Enforcement Team of the Big Bear Sheriff’s Station works proactively with Big Bear patrol deputies, County Probation officers, and State Parole officers to routinely conduct home visits and searches on local parolees and probationers pursuant to the terms and conditions of their release.