The Concourse Italiano was well attended and the presentation and setting at the Laguna Seca Golf Ranch was better than any previous year.

The cars were the best collection of Italian cars found anywhere perhaps outside Italy.  Besides such names as Ferrari, Lamborghini and Maserati one of the brand marks that attracted a lot of attention was the Fiat Abarth of Sam Cabiglio of Big Bear City.   Sam, who is a renowned sports car collector, exotic car dealer and Porsche expert along with his son Gianni spent most of the day delightfully describing their small Italian gem.

If the day was not long enough, later that afternoon Sam was called upon to help verify the authenticity of the serial number of a very rare and valuable 1973 Porsche 911 Carrera RS.  This perticular RS serial number was questioned in an on-line chat room prior to it’s possible sale at the RM auction.  High drama is created when hundreds of thousands of dollars are hanging on such verifications.  In a weird twist a very similar 911 RS was being auctioned the next night at Russo and Steele and then with several helpers in tow, Cabiglio was able to get access and compare the serial numbers appearances.  As the VIN chatter reached a high pitch more questions were raised than could be answered that night. With so much on the line for buyers and sellers, the Carrera RS was pulled from the RM auction line at the last possible moment.  Even reality TV is not as real as this episode, talk about drama.

Sports car racing in Pebble Beach is what originally ignited the Concours de Elegance 61 years ago.   The Rolex Motorsports Reunion at Mazda Raceway offered but perhaps some of the greatest excitement over the weekend for Big Bear resident Tom Sakai driving his Sunbeam Tiger.

With great delight Tom described his classic Tiger overtaking the more powerful 427 Shelby Cobra in two races that day.  Tom’s ability to mix it up with more powerful cars in the leading group demonstrated his commitment to the sport of vintage auto racing.  What makes this type of racing so thrilling for race fans is that famous racecars and drivers are very approachable at this particular vintage race.  The cork screw and Laguna Seca’s natural setting makes this race track special for all sports car fans who are allowed to wander the race paddock and rub elbows with the people and machines who made history on the track.

During all the excitement of the week many auto manufactures use the concentration of to auto enthusiasts to reveal new concept cars such as the Cadillac CELS a convertible with design elements from perhaps a classic Chris Craft.  Infinity’s 4-door concept had what could be best described as elements derived from a falcon bird of prey.  These and other concepts are all beautiful examples demonstrating the future of the auto industry.

Almost as entertaining as any other auto event for the week are the auctions.  As mentioned earlier, the quality of the cars listed for auction brings millions of dollars every evening as rare and beautiful cars change hands.  For example, a car owned by car racer and actor Steve McQueen, a Porsche 911s made famous by it’s past owner as well as having a leading roll in the opening of the 1971 McQueen movie Le Mans was up for auction.

The hammer price reached an astounding 1.3 million dollars.  A phone bidder topped several bidders in the room including Estonia Ruf of Ruf Porsche manufacturing fame.  Not to be out done, the Russo and Steele auction, which spills out into the streets of downtown Monterey, was in it’s entirety some of the best entertainment and was by far the most popular auction for downtown spectators.  The storybook growth of David Gooding and his auction at the equestrian center at Pebble Beach is legendary.  The quality and as such the prices seen at his auctions are without doubt exceptional.  David’s relationships in the classic car industry and his extensive knowledge combines for two nights of well attended auctions that need to be seen to be believed.  Friday’s record results for Gooding was highlighted with a Ferrari Testa Rosa 250 when spirited bidding climbed through the roof garnering over 16 million dollars as the hammer fell.  That one car sale produced in more money in a singular auction lot than many other classic car auctions sell in an entire day.

The Gooding and Company auction also helped with the sale of rock singer Sheryl Crow’s  personal 1959 Mercedes-Benz 190 SL Roadster to benefit the community of Joplin, following a devastating tornado that swept through this southwest Missouri city earlier this summer. It was an exciting opportunity for both car collectors and Sheryl Crow fans.

The auction followed an appearance by Sheryl Crow with Jay Leno at the Pebble Beach Concours d’Elegance.  The final price was a generous $143,000.00 and all going to a good cause.

It is hard to put into words and harder to keep up with even a fraction of the happenings on the Monterey Peninsula during the week leading up to the Concours de Elegance on Sunday. 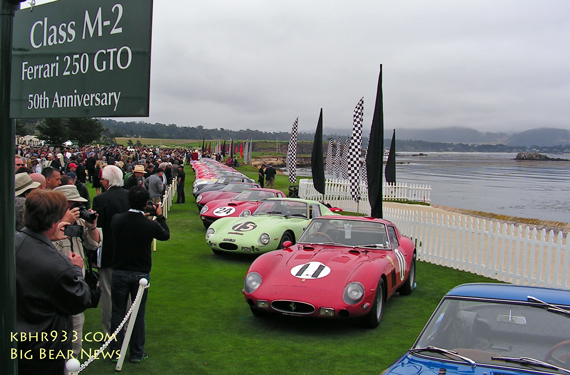 Thousands flock from all corners of the earth to show and view the best cars on the planet.  Every year is special as it takes at least 10 years to have a car re-invited to be shown again.  If you love cars, art and the outdoor beauty of the 18th green at Pebble Beach then every August you must make plans view these very special cars.   This year not only restored cars are winners but there is a very popular preservation class that shows off the cars in their original state with all the age spots in place.  The best of show went to the streamline and rarely seen 1934 Vosin C-25 owned by Peter and Merle Mullin of Los Angeles.  Vosin originally an aircraft manufacturer built cars after World War I and its aviation roots are easily recognized even to the untrained eye.

This week in the Monterey Peninsula attracts the best and the most beautiful of the automotive world and without doubt should be experienced by anyone who appreciates the art of the automobile, a road trip on Highway 1 through Big Sur and the beauty of the California coast.