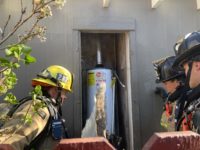 Big Bear City, CA – A residential structure fire was reported on Ash Lane between State Lane and Oak Lane in Erwin Lake at approximately 8:01 a.m. this morning, Monday, May 6. Upon arrival, fire crews observed a single-family dwelling with light smoke coming from the home. Crews were able to confine the fire to the hot water heater preventing the spread to the remainder of the home. Knock-down was obtained within 15 minutes. Crews removed the hot water heater to check for fire extension underneath the home. There were two residents at home who exited the property safely.

The first unit on-scene was Big Bear Fire Department’s Engine 283 from the Sugarloaf Station, commanded by Captain David Jayne. Command was transferred to Assistant Chief/Fire Marshal Mike Maltby upon his arrival. Big Bear Fire Department had two engines and two ambulances with a crew of eight to work the incident. CAL FIRE responded but was not activated and subsequently released.

The origin of the fire was determined to be the hot water heater.