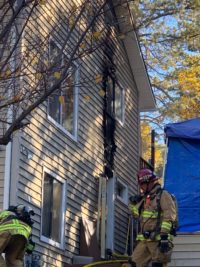 Fawnskin, CA – A residential structure fire was reported on Canyon Road in Fawnskin at approximately 8:51 a.m., on Friday, October 25. Upon arrival, fire crews observed a two-story, single-family home with fire and smoke coming from the right side of the residence. The fire started in the workshop attached to the home. Crews were able to confine the fire to the workshop. Through a swift fire attack, knock-down was obtained within approximately 5 minutes of crew arrival. There were two occupants reported at home at the time and both exited the property safely.