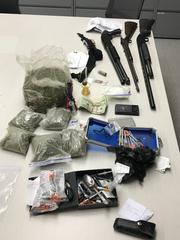 Big Bear City, CA – On Wednesday, February 12, deputies from the Big Bear Sheriff’s Station assisted San Bernardino County Probation Officers with a probation compliance check at a residence in the 200 block of East North Shore Drive in Big Bear City. 53 year old Gary Simrak was found to be at the location. Simrak is currently on Post Release Community Supervision from a previous felony charge of possession of a controlled substance for sale and is reported to have been absconding from his Probation Officer. Pursuant to the terms of his probation, Simrak is subject to search of his person and property.

As a result of the probation search, four firearms were seized, as well as ammunition, methamphetamine, other narcotics, paraphernalia consistent with drug sales, and a large amount of cash. Gary Simrak was taken into custody without incident and booked into the Big Bear Jail on felony charges of possession of a controlled substance for sale, being a convicted felon in possession of firearms, and being a convicted felon in possession of ammunition.
Simrak is being held in custody in lieu of $50,000 bail with an arraignment hearing set for February 14, in San Bernardino County Superior Court.