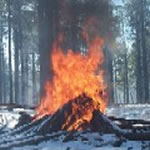 Big Bear, CA – Beginning today, Monday, November 25, fire crews plan to start burning piles from 443 acres of brush clearance on the south and southwest areas of Big Bear in three locations: to the south of Sugarloaf, in Moonridge along Forest Road 2N27 (Sand Canyon Rd.) and adjacent to Moonridge between Bear Mountain and Snow Summit. The project, which may last more than one day, will also only move forward if weather conditions remain safe and productive. It will be postponed if not.

As the winter season continues, other large projects include:

Angelus Oaks: 96 acres worth of pile and broadcast burning will occur to create defensible space around the community along Highway 38.

Baldwin Lake: 1,141 acres of piles created by ongoing contract work to increase and maintain defensible space around homes and road systems are targeted for burning.

South Big Bear: In addition to the 443 acres mentioned above, more acreage for broadcast burning may be added later in the season. The public will be notified in advance.

In addition to these large projects, pile burning may occur over the season at several U.S. Forest Service fire stations, visitor centers, recreational areas and communication tower sites. Crews will also be out performing mechanical and hand thinning of other areas, which is the first step toward conditions safe for prescribed burning. Before burns, forest staff will notify the public and media via social media and news advisories.

The ignition of all prescribed burns is dependent on several environmental conditions (e.g. wind, humidity, temperature, etc), availability of fire personnel and equipment. The projects are conducted in coordination with the National Weather Service and South Coast Air Quality Management District (SCAQMD) in order to manage smoke production and minimize impacts as much as possible.

Prescribed burning is an active forest management activity that helps restore ecological functions to the forest. Fire has a natural role in coniferous regions of San Bernardino National Forest. Caused naturally by lightning, fire has long maintained the health of forests, clearing brush on the forest floor and releasing seeds from pine cones, among other natural processes.

Aggressive firefighting and development within the forest over the past century has allowed fuels to unnaturally build up. That means an overabundance of flammable brush, which can enable wildfire in quickly spreading into the canopy and toward communities and infrastructure. Thinning forested areas helps protect such areas.

Forest officials, however, highly encourage residents and business owners to also do their part by creating defensible space around their structures, hardening those structures and planting native, fire-resistant landscaping. CAL FIRE has tips for all these steps at ReadyForWildfire.org.