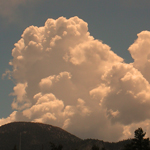 Big Bear, Ca, September 13, 2011, 5:00pm – Early this morning over 3000 lightning strikes occurred from across Southern California, mainly in Riverside, Southwest San Bernardino, Eastern San Diego, and Western Imperial Counties.  The Big Bear Valley, and surrounding forest areas have experienced some lightning strikes, resulting in a few snag fires that have been quickly put out by fire crews, or by the heavy rain we have also experienced.  Rain has been coming down intermittently throughout the day with a third of an inch dropped in just 10 minutes.  Dime sized hail was reported this morning in Big Bear City, with golf ball size hail reported in the Wrightwood area.  Due to the heavy rains, the roads are slick, and motorists and cyclists are encouraged to drive and ride with care.