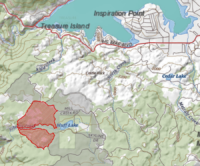 Big Bear, CA – After a wet winter and with spring weather conditions continuing to be ideal for prescribed burning, San Bernardino National Forest officials are planning to begin ignitions in an area southwest of Big Bear Lake beginning Monday, May 20. The broadcast burn on Bluff Mesa is expected to last through the end of the week. Smoke will be visible in the
immediate area and may even be seen from areas off the mountain.

The project is part of a larger effort to create defensible space for communities and infrastructure along the lake’s south shore. It is also aimed at restoring Bluff Meadow. 178 acres to the north and south of the meadow are targeted next week, with the remaining acres slated for burning later in the year if conditions allow.

“One of our highest priorities is to manage the forest to aid in protecting communities from wildfire,” said Mountaintop District Ranger Marc Stamer. “We have been preparing this area for prescribed burning for a number of years and are at a point where we can responsibly return fire
to the landscape.”

The low-intensity prescribed burn will target needle cast and duff on forest floor. Lightning strike-caused fires historically frequented the area, but with fire suppression over the last century, the duff layer has built up. An unmanaged fire in the duff can reach the roots of trees, killing stands of them across an area. Fire crews have removed the duff layer around old growth trees, including the champion lodgepole pine, one of the world’s largest known of the species.

Visitors to the immediate area should expect traffic delays along forest road 2N10 (Mill Creek) and possible closures of 2N11 (Santa Ana Divide) and 2N86. Access to the Champion Lodgepole and Siberia Creek trails, as well as the upper side of the Castle Rock trail, may be impacted. Yellow Post Campsites #28 and #29 have been closed due to their close proximity to
the treatment area and will reopen after the burn is completed and mopped up.

During the burn, updates will be found on InciWeb and Twitter. Visitors with questions can call the Big Bear Discovery Center at 909-382-2790.