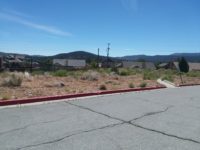 Big Bear, CA – The Bear Valley Unified School District Board of Trustees and administrative staff toured potential sites for consideration of the permanent relocation of Chautauqua High School on Tuesday.  For the upcoming school year, Chautauqua, known as CT, will be temporarily housed in three portables on the west side of the main Big Bear High School campus. Tuesday’s visit was to tour three prospective sites as well as scoping potential additional sites to review.  Two of the three sites had issues concerning proximity to parking, water, sewer and electrical sources as well as ADA compliance and grading issues. The first site is in an area by the tennis courts, however, it is estimated to be at an additional expense of approximately $300k to build there according to the district’s architects.  Another site reviewed is in the northwest corner of the campus on the newly donated land near the solar panels, adjacent to the Big Bear City CSD’s water well. The architects do not recommend this location due to an estimated $600k additional expense with no access to utilities and parking. The third location is on Maple Lane near the entrance of the high school.  Two options are being considered for this plot of land. One is to include a basketball court, recreation area and parking and one that does not include these amenities. Although this site still needs to be surveyed, it is close to sewer and utility lines according to Terry Planz, Director of Maintenance and Operations for the school district. Also, it meets the CT students request to preserve their own culture and have a space separate from the high school.  Once approved, the new site will consist of 5 portables, all of which are already owned by BVUSD and approved by the Division of State Architects. Once decided by the Board, this project will be paid for with developer fee funds used exclusively for the housing and rehousing of students.