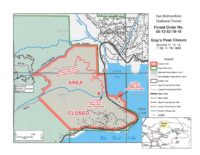 Big Bear, CA – After 40 years of conducting monthly bald eagle counts during the winter at three sites, in recent years with the aid of the public, officials with San Bernardino National Forest are discontinuing the annual census effort. Annual counts on the forest have shown the wintering population of the species remains level 12 years after the species was delisted under the Endangered Species Act in 2007. The number of wintering bald eagles in the mountains fluctuates, with the highest counts often reaching 12-15.

“While it was a difficult decision to end this long-running program, the census is no longer needed from a scientific standpoint,” said Mountaintop District Ranger Marc Stamer. “We are excited to shift our focus and work with our partners to provide opportunities for the public to continue experiencing the thrill of seeing bald eagles in the forest.”

In Big Bear, the Southern California Mountains Foundation, a Forest Service partner, is organizing to-be-announced eagle watching events and opportunities for the winter months of 2020. One way to immediately experience that thrill is through the live bald eagle nest webcam, which is provided by the Friends of the Big Bear Valley (YouTube link). The two adult eagles, named Jackie and Shadow by locals, have been observed working on the Big Bear nest, located in the Fawnskin area, recently, a sign that eggs could once again be laid in coming months. Over the past two years, viewers have been able to see a pair of chicks hatch live online. But with that excitement has come the sometimes harsh reality of nature: one chick in each pair has died during winter storms, bearing out the statistic of the 50 percent mortality rate for bald eagle chicks within the first year.

But the chicks face other threats, which includes human presence around the nest. Bald eagles during nesting season are sensitive to human interference and may abandon nesting activities if feeling threatened. To that end, the annual closure of the area around the nest began December 1. No entry, including snow play on the edges of the area, is allowed. The closure encompasses Grout Bay Picnic Area, the lower section of the Grays Peak Trail and surrounding national forest areas. The Grout Bay Picnic Area may remain closed beyond the eagle closure period due to construction work.