Police activity can be expected in both Fawnskin and the East Valley today, as the final Problem Oriented Policing Sweep of the year is being conducted. Sheriff’s deputies and officials from San Bernardino County Code Enforcement will be in these areas for the code sweep, addressing issues of abandoned vehicles, boats and trailers; vehicles with expired registration tags that … END_OF_DOCUMENT_TOKEN_TO_BE_REPLACED

Baldwin Lake residents may have heard police activity last night (Sunday, September 27), or seen the helicopter of the San Bernardino County Sheriff’s Department hovering overhead. According to the Big Bear Sheriff’s Station, a call was received in the 9pm hour, suggesting that a female in a house on the 1700 block of Pond Drive was being held against her will. Sergeant Bryan … END_OF_DOCUMENT_TOKEN_TO_BE_REPLACED 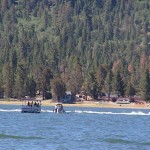 Breaking News as of 9:15am: Police activity is taking place on Big Bear Lake this morning (July 9) as, just before 9am, a paddleboat company called to report that they had seen a body in the lake, about mid-lake and in close proximity to the observatory. The San Bernardino County Sheriff’s Department is on scene, with a crew that will include a helicopter and dive team and … END_OF_DOCUMENT_TOKEN_TO_BE_REPLACED

Residents in the Big Bear City neighborhoods off Greenway and near the former Big Bear City Park may have heard some police activity last night (June 30). At about 5:45pm, the Big Bear Sheriff’s Station received a report of a white male adult, approximately 25 years old, brandishing a handgun. Sheriff’s deputies did a thorough sweep of the area and a search helicopter was also … END_OF_DOCUMENT_TOKEN_TO_BE_REPLACED

One of the four Oakland Police Department officers who was shot and killed in the line of duty on Saturday, March 21 was a Big Bear High School graduate. Thirty-five-year-old Daniel Sakai, son of Tom and Mikki Sakai of Big Bear City, was fatally shot during a standoff in an Oakland apartment on Saturday afternoon, which stemmed from a routine traffic stop two hours earlier in … END_OF_DOCUMENT_TOKEN_TO_BE_REPLACED