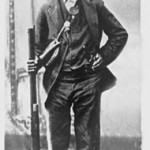 Big Bear, CA, March 15, 2014 - In 1848, gold was discovered in northern California which brought thousands of people to the state from all over the world. One of these people was Bill Holcomb who tried his luck up north, but quickly decided to head to southern California. He heard rumors of gold in Big Bear Valley, but wasn't sure how to get there. He and his … END_OF_DOCUMENT_TOKEN_TO_BE_REPLACED

Big Bear Lake, CA, January 26, 2014 - For 65 years, Old Miners Days have boosted Big Bear’s community pride and its economy. The Old Miners Association (OMA) is now gearing up for the 2014 calendar of events and is now recruiting new and returning members and sponsors. Membership levels range from $25 to $999 and offer a variety of benefits--from discounts on merchandise and … END_OF_DOCUMENT_TOKEN_TO_BE_REPLACED