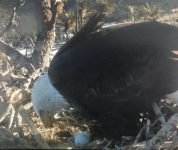 Big Bear Lake, CA - UPDATE 1/11/2020 - The second egg of the 2020 season was laid at approximately 5:09 p.m. on Saturday, Jan. 11, to the delight of thousands of live viewers on the Big Bear Bald Eagle Cam. Wednesday, January 8th, started out as a pretty quiet day at the Big Bear eagle nest. Around 3:30, Jackie and Shadow both came in, adding some fluff, moving some sticks, … END_OF_DOCUMENT_TOKEN_TO_BE_REPLACED 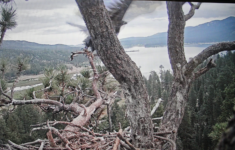 Big Bear, CA - At 6:19am this morning, Big Bear's baby eagle Simba, who seemed reluctant to leave the nest, spread his wings and flew gracefully from his perch. On March 6th, Jackie, an eagle also born in Big Bear, laid the egg that Simba would hatch from on April 14th. He survived winter storms, earthquakes, and the loss of his eagle brother, Cookie. He thrived and grew strong … END_OF_DOCUMENT_TOKEN_TO_BE_REPLACED

Big Bear, CA - Big Bear mourns the loss of one of two baby eagles born in mid April. Just like last year when we lost one of two eagles born to local eagle-mom Jackie, a late-season storm brought rain and snow to the San Bernardino National Forest on Sunday night, with nighttime temperatures dipping to below freezing. The eaglet, known as Cookie, was the second of two chicks … END_OF_DOCUMENT_TOKEN_TO_BE_REPLACED 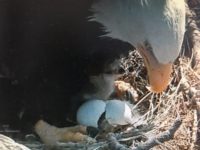 Big Bear, CA - Big Bear's full-time bald eagle couple, Jackie and Shadow, are proud parents of two eaglets. Jackie laid her first egg on March 6th and the second one shortly thereafter. The first eagle broke through it's shell, with some help from an impatient Shadow, on Sunday morning, April 14th, with the second eagle emerging this morning. … END_OF_DOCUMENT_TOKEN_TO_BE_REPLACED 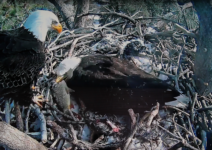 Special thanks to Friends of Big Bear Valley. Bald Eagle fledgling information courtesy of  Learner.org. The young will stay in the nest about 11 to 12 weeks. By this time their downy feathers are replaced by juvenile feathers. At the end of this time the adults will start encouraging them to fly. First flights are often rather awkward and up to half of fledgling … END_OF_DOCUMENT_TOKEN_TO_BE_REPLACED