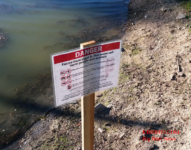 Big Bear, CA - The Big Bear Visitor's Bureau has been in joint communication with both the Big Bear Municipal Water District and the State and Regional Waterboards regarding the algae situation in Big Bear Lake. The state authorities use a different method of testing than the Municipal Water District and took samples in different locations. Both are accurate measurements of … END_OF_DOCUMENT_TOKEN_TO_BE_REPLACED

Big Bear, CA - Algae blooms are a natural and annual occurrence in many bodies of water throughout the country. They have become a national story line in recent weeks, but according the Big Bear Municipal Water District, there is little to no toxicity in the water of Big Bear Lake and very little indication that a harmful algae bloom is currently occurring in the areas that … END_OF_DOCUMENT_TOKEN_TO_BE_REPLACED

Big Bear, CA, February 29th, 2016 - After a sunny February, the hopes that El Nino storms would go a long way toward restoring California’s water supplies and correcting the damage done by years of drought are now fading. Instead, the new assumption is that in April, the state government will renew strict rules mandating water conservation in local water districts for another … END_OF_DOCUMENT_TOKEN_TO_BE_REPLACED

Big Bear Lake, CA, August 15, 2014 - The statewide general election is November 4, 2014, and voter information guides will be mailed out the first week of October. The Registrar of Voters updated their records overnight to include additional candidates for the Big Bear Airport District (see full list below). The ballot will include open seats on six local governing boards: the … END_OF_DOCUMENT_TOKEN_TO_BE_REPLACED