Big Bear News - Cherry Valley, CA - 7:30am, 8/4/20 - CAL FIRE investigators have determined that the cause of the Apple Fire was the result of a vehicle malfunction, specifically, a diesel-fueled vehicle emitting burning carbon from the exhaust system.  Officials are seeking information from anyone that may have seen a vehicle which appeared to have mechanical problems or … END_OF_DOCUMENT_TOKEN_TO_BE_REPLACED 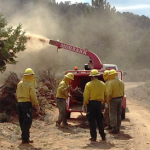 Big Bear, CA, July 9, 2015, 11:40am - The Lake Fire has remained at approximately 31,359 acres in size and is 98% contained and is being managed by Jason Winbigler’s Type 3 Team from the San Bernardino National Forest. The fire behavior is currently minimal with heavy fuels smoldering within the perimeter.  Smoke may be visible, however it is all well inside the containment … END_OF_DOCUMENT_TOKEN_TO_BE_REPLACED

Big Bear, CA, June 6, 2014 - Since November 1, 2013, many areas in California have received less than half their normal precipitation, resulting in very dry brush. As of Memorial Day weekend, there have been more than 1,700 wildfires in California since the start of the year, which have burned more than 15,000 acres. Compared to the five year average, that is nearly double the … END_OF_DOCUMENT_TOKEN_TO_BE_REPLACED

San Bernardino, CA, June 29, 2012, 8:00am – As the seasonal fire danger increases, forest officials are increasing fire use restrictions on the San Bernardino National Forest effective today (Friday, June 29, 2012). The forest experienced less than average winter snow and rainfall, and the seasonal outlook calls for a warmer summer with below average rainfall, which could … END_OF_DOCUMENT_TOKEN_TO_BE_REPLACED

Sacramento, CA, May 2, 2011, noon - This week is “Wildfire Awareness Week”. Cal Fire is urging homeowners to be ready for wildfires. Wildfire Awareness Week is designed to not only remind Californians of the dangers wildfires pose, but also to educate them on how to prepare their property. So far this year, California has experienced above average rainfall across the state. The … END_OF_DOCUMENT_TOKEN_TO_BE_REPLACED