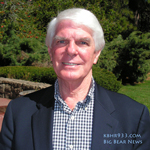 Big Bear, Ca, January 12, 2012, 1:00pm - Representative Jerry Lewis announced this week that he will retire at the end of this term after 46 years in elected office and 33 years representing San Bernardino and Riverside County in Congress. Lewis is the longest-serving Republican member of Congress from California, and the first member from the state to be Chairman of the … END_OF_DOCUMENT_TOKEN_TO_BE_REPLACED

Big Bear Lake, CA, June 11, 2011, 1pm - Caltrans and Flatiron will be celebrating the opening of the new $39 million bridge over the Big Bear dam on the new bridge deck, June 24th from 11:00 a.m.- 1:00 p.m. Construction began in early 2009 and has survived two harsh winters. The new structure is located on the south side of the dam. The project realigned the roadway, … END_OF_DOCUMENT_TOKEN_TO_BE_REPLACED