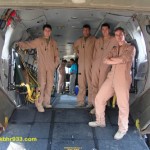 If you have seen a giant green helicopter flying over Big Bear Lake this week, that craft is a Merlin, one of 30 in England’s Royal Air Force. The crew of the Merlin has spent the last five years in Iraq and, this month, is stationed in El Centro, California for flight training in preparation of a tour in Afghanistan at year’s end. As FL Lieutenant Sam Fletcher tells KBHR, “It … END_OF_DOCUMENT_TOKEN_TO_BE_REPLACED 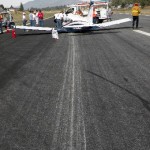 The weather was perfect and the large crowds of over 7000 attendees were entertained with a great collection of vintage and modern aircraft at the Wings over Big Bear Air Fair.  The vintage lineup included the folding wing F4U Corsair, B-25 Mitchell, P 38 Lighting, P-40 Warhawk and a P-51 Mustang, all from the Planes of Fame Museum in Chino.  Other highlights included the Big … END_OF_DOCUMENT_TOKEN_TO_BE_REPLACED