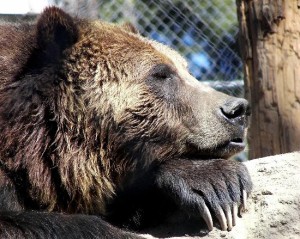 Big Bear, CA, March 29, 2014 – In 1959 a forest fire engulfed the San Bernardino National Forest and in the aftermath, several injured animals were found that required care. A makeshift hospital and rehabilitation area called the Wildlife Habitat was set up where the zoo is currently located. Two bobcats and an orphaned baby black bear were the first residents of the future zoo.

In 1961, plans for the new Moonridge Zoo were drawn, the first zoo supervisor was hired, and the first enclosures were built. Also that same year, Herman the black bear, one of the zoo’s most famous residents, was rescued during a forest fire at Barton Flats.

During the 60s many upgrades were made to the zoo including landscaping, a pond, restrooms, and a new bear den for Herman. Many more animals arrived and the eagle aviary was completed in 1967. Attendance increased from a few hundred over Memorial Day weekend in the mid 60s to over 3000 in the early 70s during that same period.

The 70s and 80s saw many more facility improvements and the addition of dozens more animals including bears, coyotes, wolves, peacocks, turkeys, and mountain lions. It wasn’t until 1992 that the zoo started charging admission. The Big Bear Alpine Zoo is a rehabilitation facility first, and is extremely proud of the fact that 9o% of all the animals brought to them are successfully released back into the wild. It is also one of only two alpine zoos in the country. Very soon, a new chapter will begin for the zoo with their relocation to a larger, improved space.