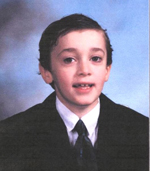 Big Bear, Ca, September 14, 2011, 9:00am – Joshua Robb, the 8 year old boy who went missing from a elementary school Monday morning was found yesterday afternoon.  At approximately 12:50pm on Tuesday, September 13th,  a t-shirt that was confirmed to be Joshua Robb’s was found.  A tracking team from the San Bernardino County Sheriff’s Department – San Bernardino Mountain Search and Rescue Team were dropped off at the school and began hiking, and located fresh shoe tracks.  Team members tracked those shoe tracks for approximately 1.5 miles calling Joshua’s name.  According to the San Bernardino County Sheriff’s Department at approximately 2:27 p.m yesterday., Joshua came out from behind some brush and walked towards the search members.  Joshua looked up at the team members and said “Thank you, you saved me.”   The area that Joshua was located is densely wooded forest area and was approximately 1 mile from the Grandview Elementary School.   Joshua was given food and water by team members who stated he appeared to be tired, and slightly dehydrated.  Team members carried Joshua to a clearing where Sheriff’s Air Rescue 6 hoisted a medic down to Joshua to assess his condition.  Joshua was then hoisted out of the area and transported to Loma Linda Medical Center for a precautionary exam as he was cold and only wearing his shorts when he was found.