Big Bear Lake, CA. 1/22/16 – Triumph and tragedy, Downhill Gold Medalist Bill Johnson dies at 55.  Bill Johnson grew up in Los Angeles and previously told his fans that “he was not an athlete but just someone who loved skiing including water skiing”.  It was obvious that he also loved to go fast.   Prior to his 1984 downhill Olympic gold medal win in Sarajevo, he won in the Euro Cup and a Downhill Gold at Wengen Switzerland.  After his astonishing Olympic Gold Medal win he went on to win twice at Whistler and Aspen.  He was often criticized by the european press for his brash american attitude and criminal past which included getting caught stealing cars.  The judge in his case  insisted that he attend a ski academy, which he did at the Mission Ridge Ski Academy in Washington where he kept on getting faster. 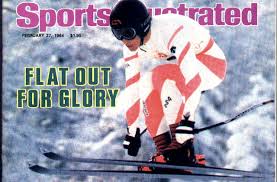 Bill Johnson suffered a severe racing crash in 2001 while on a downhill training run at the U.S. championships at Big Mountain near Whitefish, Montana.  He suffered severe brain injuries which left him with memory loss and required training just to walk again.   More recently he suffered from a series of strokes.  Megan Harrod, a spokeswoman for the U.S. Alpine team, said Johnson was at an assisted living facility in Gresham, Oregon where he died Thursday.   ABC Sports Bill Johnson profile 1984.