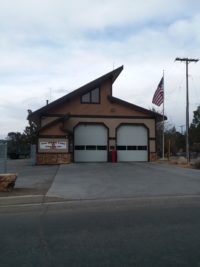 Big Bear, CA – With a full house of concerned citizens at Big Bear Fire Station 281 in Big Bear Lake, the Board of Directors were presented with an alternative or, as described, a hybrid budget which allows for keeping the Sugarloaf Station 283 open for at least 9 months or until a ballot measure is voted on in March of 2020. Perhaps as many as 200 citizens were present with 50 people presenting their ideas and displeasure with the proposal of closing down or limiting the capabilities of the Sugarloaf fire station. The initial nod by the fire board to close station 283 in Sugarloaf took place during a budget workshop in March and was anything but a unanimous decision. At that time, several board members prefered adopting a hybrid budget which would keep 283 open for a period of time until a permanent funding solution was found.

Fire Board Chairman Jahn, a Big Bear Lake City Council Member, seemed frustrated at times with the crowds demeanor and, through no fault of his own, with a sound system that was not adequate. The overwhelming view from the audience was to do what it takes to keep open all the Big Bear fire stations and go further with an expansion of service to keep pace with growing demands. As Fire Chief Jeff Willis pointed out, Big Bear is in need of additional paramedic firefighters and needs to expand or add a fire station in the Moonridge area which now suffers from response times as long as 15 minutes.

Many in the audience suggested that the City of Big Bear Lake bear the brunt and absorb the valley wide fire department budget shortfalls, but previously City Council members have raised the red flag that it is not equitable, fair, or legal to redirect funds from an incorporated city to a separate Fire District or Fire Authority and could be met with resistance from city residents and businesses.

The three and a half hour meeting ended with the majority of the board members switching positions and thus supporting a budget to keep station 283 in Sugarloaf open for now.  Because deficits will continue, council member and board member Caretto emphasized that if the public votes down the March 2020 funding initiative, that station closures and other drastic cuts will be back on the table.

Although there are different methods of sharing the costs associated with keeping the valley wide fire department solvent, the exact details are not yet crystal clear, but initial indications are that valley property owners, tourists, and the resorts will play a role.