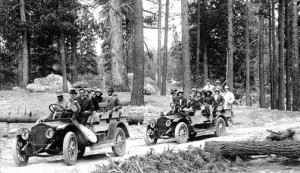 Big Bear, CA, April 26, 2014 – The first road into the San Bernardino Mountains, which was really just a trail, was built by the Mormons in 1852 and ascended Waterman Canyon. Big Bear Lake was created in 1885 and the only way up, other than a pack trail up Santa Ana Canyon, was a long arduous trip up Cushenbury Grade. To get to the Grade, visitors first had to travel over Cajon Pass to the desert before climbing the steep grade to Bear Valley.

In May of 1888, the Bear Valley Toll Road Company was formed. They cut a road into Santa Ana Canyon and over the mountains  into the Valley, and used a combination of stage coach and mule train for the two day trip to Big Bear. In 1891, Gus Knight and John Metcalf formed the Bear Valley Wagon Road Company and by the following year had completed a road through what is now Running Springs. Stagecoaches began making scheduled runs into the valley three times a week. With this new road, travel time to Big Bear was cut to a day and a half.

It was 1908 when the first automobile made the 101 mile trip up. Since gas stations were non-existent, a 20 horsepower steam powered vehicle was chosen to make the trek, and did so with much difficulty. In 1915, Rim of the World Drive was completed, and for the first time anyone with a car could drive to Big Bear Lake.