Big Bear, CA, January 25, 2017 – Big Bear residents and business owners will be digging out from back to back to back storms for days to come. With over 100″ at resort level, January 2017 is the snowiest on record, surpassing both 2010 and the previous record of 50″ set in 1979. The average snowfall for the season here in Big Bear is 62″ and we received 70″ above 8000′ in this last series of storms alone.

The lake has also responded positively to our above average precipitation. On December 12 the lake level was down 16′ 11″ from full. The Big Bear Municipal Water District just posted that the the lake now sits at 14′ 8″ from full, up 2′ 3″ in just over a month. With two of the three wettest months of the year still to come, we could see more dramatic increases in lake level. And with nice weather ahead, we have a chance to dig out. 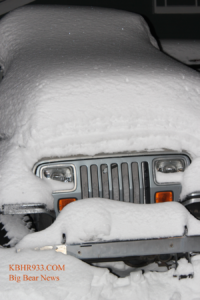