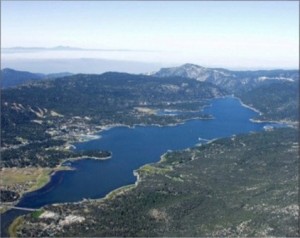 Big Bear, CA, August 16, 2014 – In the late 1950s and early 1960s, southern California was in the midst of an extended drought. Due to large demands on water from Big Bear Lake for irrigation down the hill, the lake had been reduced to little more than a large mud puddle.

Although the dam was originally constructed to provide irrigation water for the Redlands and San Bernardino areas, the extensive recreational community of Big Bear decided to attempt to gain control of the lake since recreation on the water requires a reasonably stable lake level. In 1964, by an overwhelming vote, the people of Big Bear Lake created the Big Bear Municipal Water District with the express purpose of stabilizing the level of the lake.

The new MWD Board of Directors got right to work. A thirteen year legal battle ensued which finally led to an out of court settlement where for 4.7 million dollars , the MWD acquired title to the dam, the lake bottom, and the surface recreation rights of Big Bear Lake. The solution to satisfying irrigation interests downstream as well as maintaining lake levels is that each year the Bear Valley Mutual Water Company determines irrigation needs and estimates the demand on Big Bear Lake to meet those needs. The MWD then has the option of either releasing water from the lake or supplying the water from another source. In this manner, the Municipal Water District can maintain Big Bear Lake at an elevation significantly above its historic level.