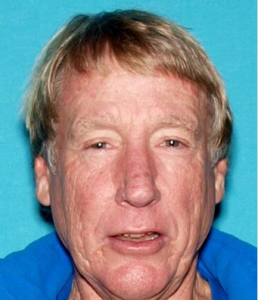 Missing Hiker Gary Grine was located earlier today. Grine sustained minor injuries overnight in rugged terrain. At approximately 11:15 a.m. today, Grine was able to flag down a group of off-roaders, who called in Grine’s general location to Sheriff’s Dispatch. With the assistance of the off-roaders, Sheriff’s Aviation, and deputies and Search & Rescue members from the Big Bear Sheriff’s Station, Grine was escorted to a staging area where paramedics were waiting to treat his injuries.

The Big Bear Sheriff’s Station thanks the public for sharing information that ultimately led to locating Gary Grine. Special thanks to the off-roaders for the assist!!

Big Bear, CA, August 13th, 2016 – On Friday, August 12, 2016, Gary Grine and his girlfriend were camping at the Hanna Flat Campground near the town of Fawnskin. At approximately 8:30 p.m., Grine’s girlfriend discovered Grine had left the campground with his hiking poles and camera. When Grine did not return later in the evening, Grine’s girlfriend notified the San Bernardino County Sheriff’s Department. Sheriff’s Aviation, a K9 Unit, and a search team from Bear Valley Search & Rescue was deployed last night and continues to search for Grine in the area. Anyone with information on the whereabouts of Gary Grine is requested to immediately contact the Big Bear Sheriff’s Station at (909) 866-0100.