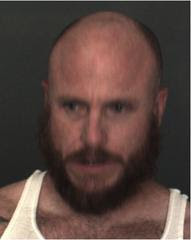 Big Bear, CA – On Sunday, August 18, the Big Bear Sheriff’s Station received a report of a man sitting on the tailgate of a truck, pointing and shooting a bow and arrow into the street and at vehicles in the vicinity of North Sierra Avenue and North Shore Drive in Big Bear City. Deputies arrived and spoke with the man, 37 year old Big Bear City resident, Jathon Musella. Musella was found to be in possession of bows and arrows; however, he was not actively pointing or shooting them at the time deputies spoke with him and no damage was found in the immediate area. The case was forwarded to the Detective Bureau of the Big Bear Sheriff’s Station for further investigation.

As a result of the investigation, Detectives served a search warrant at a residence in the 100 block of E. North Shore Drive at approximately 2:30 p.m. on Friday, August 23. During the search, several bows were seized for evidentiary purposes, along with bolts and arrow tips. Jathon Musella was taken into custody without incident and booked into the Big Bear Jail on a felony charge of willfully projecting an object at a vehicle with the intent to cause great bodily injury. Musella remains in custody in lieu of $25,000 bail with an arraignment hearing scheduled for August 27 in San Bernardino County Superior Court.

This matter remains under investigation to determine if there are any unreported victims who may have been targeted by Musella. If you believe you were a victim of this crime or if you have additional information pertaining to this case, you are urged to contact the Big Bear Sheriff’s Station. Anyone wishing to remain anonymous can report information through WETIP by calling (800)-78-CRIME or online at WeTip.