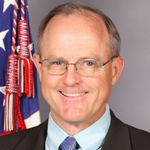 Big Bear, Ca, February 8, 2012, 4:00pm – Another name has been thrown into the hat for the San Bernardino County Supervisor for the 3rd district.  Jim Bagley announced earlier this week of his intentions to run for the County Supervisor seat.  Bagley will be joining current Supervisor Neil Derry, and James Ramos in the election.  According to his campaign team, Bagley has served as the Mayor of Twentynine Palms for three years, served as the president of the San Bernardino County Transportation Agency, and served on various other committees and commissions.  Bagley joins the race for Supervisor in the midst of current Supervisor Neil Derry sending out fliers to over 11,000 of his supporters stating that Ramos has links to “gang members”, and goes on to describe Ramos as a “Casino Boss.”  According to an article in the Press Enterprise, Dave Gillard, a consultant for Ramos described the mailer as gutter politics.  Ramos who is the current Chairman of the San Manuel Band of Mission Indians told the Press Enterprise that the reservation is a safe community.  The election for County Supervisor along with other positions up for office will be held on November 6th.  Citizens are encouraged to educate themselves on the issues and candidates and make an informed decision when it comes time to vote.