Suspect Nioel Banuelos was booked into the Big Bear Jail on felony charges of Evading a Peace Officer With Disregard for Public Safety; Assault With a Deadly Weapon; and Assault With a Deadly Weapon on a Peace Officer.  Banuelos remains in custody at High Desert Detention Center.  The active no-bail probation violation warrant issued against him precludes Banuelos from posting bail.  Court hearings in this matter are scheduled for April 11 and 12in San Bernardino County Superior Court.

Big Bear Lake, CA, April 7, 2016 – High Speed pursuits are unusual for Big Bear but the residents in Big Bear Lake near Edgemoor and Highway 18 witnessed the termination of this pursuit.  At approximately 3:20 p.m. on April 7, deputies of the Victor Valley Sheriff’s Station attempted to conduct a traffic stop on a black Honda Civic in the area of State Highway 18 and Bear Valley Cutoff. The driver of the vehicle failed to yield and began driving erratically and crossing into oncoming traffic at speeds up to 120 miles per hour. Deputies from the Apple Valley Sheriff’s Station assisted with the pursuit when the driver continued westbound on Highway 18 into the Town of Apple Valley.

The driver continued to drive in a reckless manner at high rates of speed, passing vehicles and driving on the wrong side of the road, and running red lights. The vehicle turned into a residential neighborhood and made a u-turn to head eastbound on Highway 18. Deputies followed the vehicle in a moderate to high speed pursuit as it made its way from Apple Valley to Big Bear via Highway 18 through Lucerne Valley. The pursuit continued at low to moderate rates of speed from Baldwin Lake, through Fawnskin on Highway 38, and East on Highway 18 into the City of Big Bear Lake.

The Sheriff’s Aviation Division assisted with aerial support to track the vehicle. The California Highway Patrol was notified of the pursuit and assisted with preparation for spike strip deployment at strategically staged locations. To ensure public safety on the roadways, deputies slowed their pursuit, but continued to follow and monitor the vehicle, as the Sheriff’s helicopter maintained aerial observation. The driver made another u-turn, heading West back towards the Big Bear Dam. Spike strips were unsuccessfully deployed and the vehicle continued to make its way down Highway 18 towards Snow Valley. 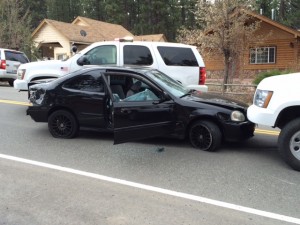 Officers of the California Highway Patrol staged a roadblock on Highway 18 in the Arctic Circle. Upon seeing the road block, the driver turned around, once again heading for Big Bear. Spike strips were successfully deployed, deflating all four tires of the vehicle. The driver continued to flee in the vehicle on the flattened tires. Deputies stopped the vehicle at the intersection of Highway 18 and Edgemoor using a successful Pursuit Intervention Technique (PIT). The driver refused to comply with demands from the deputies to get out of the vehicle. Deputies made entry into the vehicle and took the suspect into custody.

The suspect was identified as Nioel Banuelos, a resident of Pasadena. A records check confirmed Banuelos was wanted on a no-bail probation violation warrant out of Los Angeles County. Booking procedures are currently in progress.