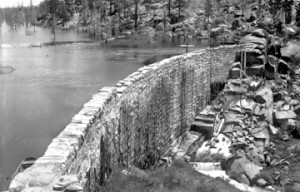 Big Bear, CA,  February 8, 2014 – Perhaps you’ve seen movement out of the corner of your eye from time to time, or the flash of a misty figure on a dark night. Or maybe you’ve found your dog staring at something you couldn’t see. If you’ve had one of these experiences, you may have met one of the many ghosts that are said to inhabit Big Bear right along with us.

Our most famous ghost is undoubtedly George, the accountant at the Captain’s Anchorage, who died long ago under mysterious circumstances. Long time employees tell stories of their clothing being tugged on, whispering in their ears, bottles falling off shelves, and music playing when no one is there.There’s a woman in Sugarloaf who claims that a group of Serrano Indian spirits walk through her kitchen on a regular basis. And of course there is the story of the Indian maiden who threw herself off Castle Rock when her warrior prince didn’t return from battle. Hikers and rock climbers have reported seeing what are thought to be echoes of the moment she fell.

Some of the other spooky spots in Big Bear where you might have your own encounter include the Miss Liberty Tour Boat and the Big Bear Mountain Brewery. Miss Liberty is docked near the spot where two children are thought to have died many years ago and workers have reported hearing children’s voices down below in the boat. The Brewery is in one of the oldest commercial buildings in Big Bear. Built in 1925 as the original Masonic Temple here in the valley, people have said they still can feel the spirits of Bill Knickerbocker, Ed Stanfield, and the rest of the early leaders of the Big Bear Valley meeting in the old Lodge room upstairs.

So keep your eyes peeled, and when the hair on the back of your neck stands up or goose-bumps break out on your arms, look around. Maybe you’ll see the Lady-in-White standing on the old rock dam.