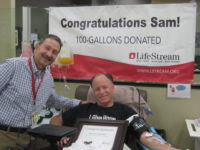 Forest Falls, CA –  Samuel Anderson of Forest Falls, likes getting his Sunday mornings off to a lifesaving start by driving “down the hill” and donating blood at LifeStream blood bank’s San Bernardino Donor Center. When he did so on April 15, his platelets donation made him the 20th LifeStream donor to reach 100 gallons in lifetime blood donations.

For Mr. Anderson, the number is nice, but won’t effect a change in his routine. “I didn’t really think about this milestone until I started to get close,” he said, “but I don’t see an end to my commitment to donating. It’s just a part of what I do every other Sunday.” Platelets, which are an essential clotting agent in the blood, may be given up to 24 times in a calendar year. Like most regular platelets donors, Mr. Anderson donates biweekly so his gifts are spread over virtually the entire calendar year.

Mr. Anderson, 58, first donated blood in 1983 following the lead of an acquaintance who urged him to “come along” and experience the process. Whole-blood donations may be given every 56 days; Mr. Anderson converted to donating platelets and began his biweekly schedule of giving blood in the early 1990s. He considers the time in the donation chair wisely spent. “Being able to help people with just a single donation that only takes 2 hours out of my day is a great reward,” he said. “Giving blood is the opportunity to help someone who through no fault of their own need blood or a blood product.”