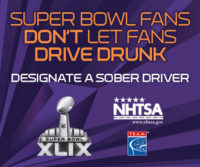 Big Bear, CA – On Sunday, February 4, football fans across the country will gather with friends and family to watch Super Bowl LII. The California Highway Patrol is teaming up with the National Highway Traffic Safety Administration to remind motorists to designate a sober driver before the game begins.

According to preliminary data from the CHP’s Statewide Integrated Traffic Records System, during last year’s Super Bowl, one person was killed in an alcohol-involved collision and 41 others were injured on California’s roadways. That same day, there were 247 arrests made by the CHP for driving under the influence. Consequences of a DUI arrest are jail time, the loss of a driver license, higher insurance rates, court fees, car towing and repair, and lost wages from time off work.

If you are hosting a Super Bowl party, be a team player and help keep impaired drivers from
getting behind the wheel. Make proper arrangements and designate your sober driver before the
big game begins. And remember: Fans Don’t Let Fans Drive Drunk.