Big Bear Lake, CA, July 19, 2016 – Big Bear Fire Department responded to a reported structure fire on Timberline Trail in Big Bear Lake at approximately 1:42 a.m. on Monday, July 18. Upon arrival of fire crews, the garage and single-story home were well-involved with active flames visible. Crews were unable to make entry due to the intensity of the fire; an exterior attack was taken and fire was suppressed within a short period of time. Once the flames were knocked down, crews were able to make an interior search. The home was unoccupied at the time of the fire.

For tips on fire safety in your home, visit BigBearFire. 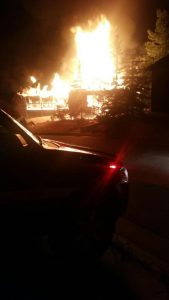