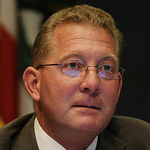 Big Bear, Ca, July 25, 2011, 12:00pm – San Bernardino County Supervisor Neil Derry plead guilty last Tuesday to one misdemeanor count of failing to report a campaign contribution during his 2008 campaign to become County Supervisor.  Derry entered into a plea agreement to have the felony charges against him be dismissed.  According to the San Bernardino Sun, San Bernardino Superior Court Judge Michael Dest sentenced Derry to three years of probation and ordered him to pay a $5,820 fine to the state Fair Political Practices Commission and a $4,160 fine to the court. “This was clearly a political prosecution from the beginning in an effort to remove me from office without cause,” Derry told the Sun after the hearing.  Derry further stated, “I agreed to this so I can get back to work.  This was a compromise. I still maintain my innocence.”