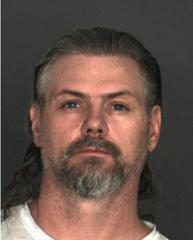 Fawnskin, CA – On Monday, August 27, Deputies from the Big Bear Sheriff’s Station initiated an investigation into allegations of sexual molestation by 44 year old, Fawnskin resident Shawn Evans, against a minor child. Deputies served a search warrant at Evans’ residence on August 28, and he was taken into custody. During the investigation, Deputies determined Evans had sexually molested at least one minor child in Arizona approximately nine to 10 years ago. Deputies believe additional victims may exist in Big Bear.

Evans was booked into the West Valley Detention Center under a fugitive felony warrant. Evans remains in custody without the possibility of bail pending extradition to Arizona where he will face criminal charges of sexual molestation of a minor child. The investigation in California is ongoing. Anyone with information regarding this matter is asked to contact Deputy B. Francis at the Big Bear Sheriff’s Station at (909) 866-0100. Information can also be reported anonymously by calling WETIP at (800) 78-CRIME or online at www.wetip.com.