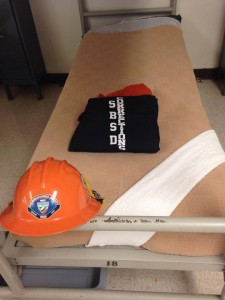 San Bernardino County, CA, November 25, 2015 – San Bernardino County Sheriff John McMahon and Deputy Fire Chief Jim Johnstone have announced the graduation of the first County Female Inmate Hand Crew, the first such crew in the nation, known as Glen Helen Crew 15-9. After 8 weeks of training that began in July, with an initial curriculum in wildland fire suppression techniques, along with the basic Incident Command System, first-aid, CPR, confined space awareness, chainsaw operations, and small engine and facility repair— GlenHelen Crew 15-9 has been deployed to assist in a vegetation fire in Victorville, with several upcoming assignments to include preparation for El Nino.

Proud of their accomplishments, Sheriff McMahon says the goal is to assist them in turning their lives around and send them back into mainstream society rehabilitated, educated and ready for employment. To be considered for the crew, the inmate must be a low-level offender (no criminal history of violence, sexual or serious violations); must have 15-18 months sentence left to serve; no documented gang affiliation; no prior discipline; and must not be a flight risk.