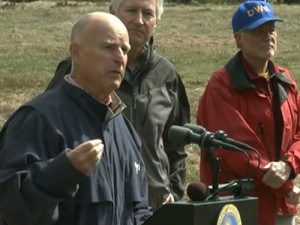 As the state braces for a hot and dry summer, top state, federal and local officials will meet Thursday, April 9, to discuss drought response actions, impacts and steps underway to stretch California’s depleted water reserves this year. Among the topics to be covered at the 2015 Drought Briefing will be an overview of  the extended drought conditions in California, State and Federal response efforts, impacts on farms and fish, as well as the 2015 Save Our Water Campaign. Late last month, the California Assembly, Senate, and Governor announced emergency drought legislation that included one billion dollars in funds that could aid current drought efforts as well as proposed augmentations for emergency food assistance, emergency drinking water, and conservation actions.

In an historic move, Governor Jerry Brown issued an executive order yesterday ordering water use to be slashed by 25 percent across the state. That could mean a savings of 1.5 million acre-feet of water over nine months. “This historic drought demands unprecedented action,” Brown said in a statement. “Therefore, I’m issuing an executive order mandating substantial water reductions across our state. As Californians, we must pull together and save water in every way possible.”