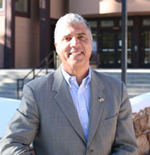 Big Bear, Ca, July 28, 2011, 3:00pm – The Big Bear Lake City Council and the Improvement Agency met yesterday in a special meeting to discuss and approve changes made to the City Managers contract.  Council voted to remove City Manager Jeff Mathieu’s housing allowance from the contract, and to remove payment that came from the Improvement Agency.  In a three to two vote, Council also voted to increase the City Manager’s base pay from $185,000 a year to $221,000 a year.  Mayor Pro Tem Rick Herrick and Councilman David Carretto voted against the pay increase.  Councilman Carretto stated that he had done some research on other City Manager’s pay levels within San Bernardino County and that the average was $218,000.  Mayor Pro Tem Herrick and Councilman Carretto both thought that for the size of our city, the City Manager’s annual salary should be lower than $200,000.  Both praised Mathieu on his work done, and stated that their reason was not based on performance but on the size and financial scope of the city.    The meeting was adjourned, and no members of the public attended.