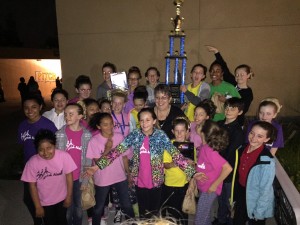 Their competition program for this year is entitled “Girl Power”, and along with songs like “Girls Just Wanna Have Fun” and “We Are Family”, features an original number written by choir director Robin O’Hare as well as a dance duet choreographed by Cathy Winch to “Let It Go”.

This is the group’s fourth first place win in their past five competitions.