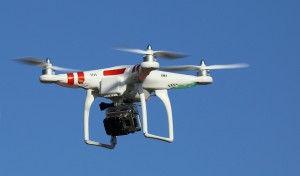 San Bernardino County, CA, August 5, 2015 – Drone operators have been asked repeatedly not to fly their aircraft during wildfires. But at crucial moments in each of the wildfires that have broken out in San Bernardino County so far this year, fire-fighting air tankers had to be diverted away from their targets because of the presence of small airborne hobby drones.

The County Board of Supervisors decided asking is no longer enough and created a $75,000 reward fund for the arrest and conviction of anyone who flew any remote control-operated aircraft and interfered with fire-fighting aircraft during the recent Lake, Mill 2, and North fires.

“Because fire-fighting planes could not be used, those fires spread faster and further,” Board of Supervisors Chairman James Ramos said during a news conference. “In the most recent fire, the North Fire, we saw cars and trucks burning on the freeway, we saw homes burn, and we saw families running for their lives,” Chairman Ramos said. “We want to know who was flying drones, and we want them punished. Someone knows who they are, and there is $75,000 waiting for them.”

Sheriff John McMahon said his department will actively pursue drone operators in addition to its other vital duties during wildfires. And District Attorney Mike Ramos warned drone operators that they could and would be prosecuted for murder if their drones led to the death of a fire-fighting flight crew or anyone on the ground.

Those with information on anyone who flew drones during those fires are urged to call WeTip at 1-800-78-CRIME. Callers can remain anonymous. Up to $25,000 is available for each of the three fires. The District Attorney will ultimately determine who qualifies for the reward money and for how much.

Low-flying air tankers cannot share the sky with drones because the small aircraft can be sucked into jet engines, causing the engines to fail and the planes to crash. Interfering with fire-fighting operations is a criminal offense, and District Attorney Ramos said there are several criminal statutes prosecutors can employ to bring drone operators to justice. State and federal lawmakers are in the process of creating new laws aimed specifically at those who fly drones during wildfires.