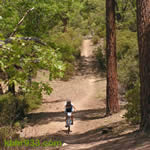 Big Bear, Ca, May, 23, 2011, 1:00pm – The locals came out in full force this past weekend for the Big Bear Shootout #1 mountain bike race.  Teams Bear Valley Bikes, Chains Required, Steven K Pro Sports, and Loeka teams were well represented with  Romolo Forcino and Ely Woody from team Chains Required placing 4th and 5th in the Pro Mens Feild.  Local Big Bear rider Lauren Gregg Riding for team Loeka took first place for Cat 1 women 19-29, and had the best Cat 1 ‘ time for the entire field.  The Bear Valley Bikes women’s team was well represented with many top spots, and podiums for the ladies including:  Cythina Miranda, Veronica Eliasson, Alison Hyde, Louise Boyer and Michelle Russell).  The Williams family continue to do well with Evan Williams placing first in Category 2 Juniors, older brother Casey placing second in Category 1 Juniors and 11 year old Elle Williams placing 2nd for Junior Women 14 and under.  Another family of cyclists to watch out for are the Burton Boys with nine year old Alex Burton took first place for the Junior men 10 and under, beating the rest of the competition by over 8 minutes.  Brothers Zachary and Ryan Burton also did well placing 4th and 2nd in their feilds.  The next Big Bear Shoot Out will be on June 19th, and will also be one of the events in the Conquer the Bear, and Conquer the Cub series.  For more information go to TeamBigBear.com.